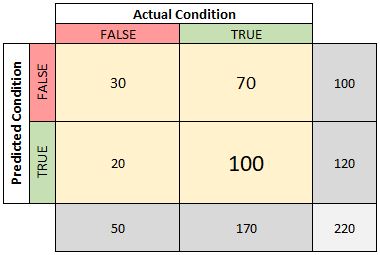 A few notes about confusion matrices that you should be aware of:

Now that we know what comprises the confusion matrix, we can begin to look closer at how the values provided can be evaluated to determine the effectiveness of our model. For the following analyses, we will use the more general confusion matrix where the counts have been replaced with “TP” for True Positives, “TN” for True Negatives, etc. 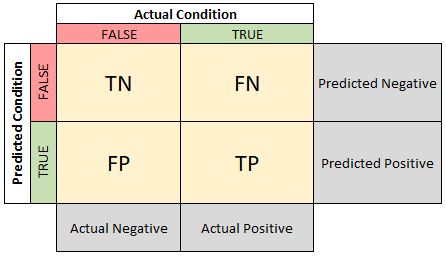 One of the key indicators of the confusion matrix, if not already known, is the prevalence. This value indicates how many true or positive cases actually occurred out of all of the observations. To calculate this value, divide all of the (actual) true observations with the total number of observations.

After understanding the prevalence, the next basic metric that can be derived is the prediction accuracy. Instead of dividing the count of actual true values, we divide the count of correct predictions by the total number of observations.

Alternatively, you can find the misclassification rate which indicates how often your model was wrong. Instead of looking at the correct predictions, we divide the count of incorrect predictions by the total number of observations.

You may have noticed that summing accuracy and misclassification rate will equal 1 or alternatively:

The next four sets of metrics move away from the overall performance of the model and look at different ways of measuring predictive power (or lack thereof). This means we will not only be changing the numerator but also the denominator in each formula. Grasping these subtle differences is critical as they dramatically alter our interpretation of each.

We can also evaluate the associated metric called the true negative rate (also known as specificity) which indicates how often we correctly classify negative cases.

You may have identified a pattern here: false positive rate plus specificity (TNR) equals 1.

The positive predictive value (also known as precision) of our model will indicate how often we correctly classify an observation as positive when we predict positive. To calculate PPV we divide the number of correct positive guesses by the total number of positive guesses.

Alternatively, we can calculate the false discovery rate which indicates when we predict positive, how often are we incorrect.

And yes, adding false discovery rate and precision will sum to 1.

The negative predictive value (apparently doesn’t deserve a nickname and) indicates how often we are correct (true) when we predict an observation to be negative.

If we want to know how often we are incorrect when we predict a value to be negative, we can evaluate the false omission rate.

Adding the negative predictive value with the false omission rate will sum to 1.

Now that you understand the common metrics derived from the confusion matrix, we should explore two popular graphs that can be generated from the metrics (there are others but we will stick with these two for now).

An ROC Curve plots True Positive Rate (Sensitivity) against False Positive Rate (1 minus Specificity). This curve is instrumental when deciding what classification cutoff may be appropriate to use as tradeoffs in sensitivity and specificity can be seen. A term commonly used when evaluating an ROC Curve is the area under the curve (AUC). A perfect classifier has an AUC equal to 1 while a classifier which relies on a coin-flip has an AUC equal to 0.5.

An example from my post on predicting criminal recidivism is shown below: 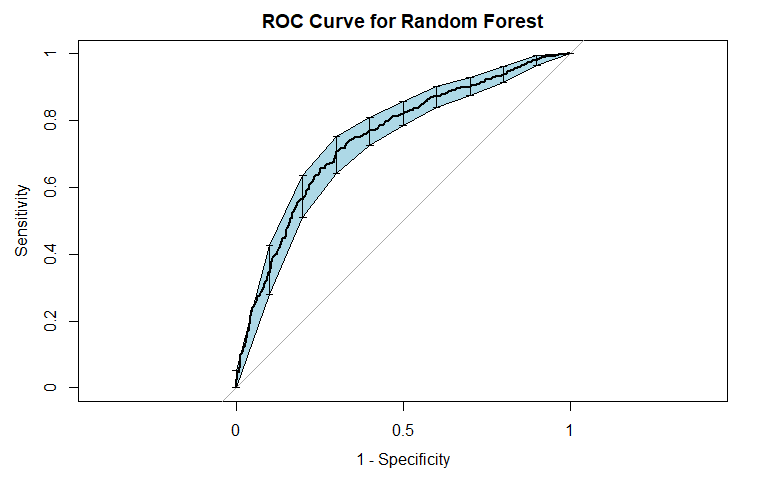 A Precision-Recall Curve is a supplemental graph which can help identify appropriate cutoffs as well. Recall (Sensitivity, TPR) is plotted along the X-axis and precision (PPV) is plotted along the Y-axis. One note about precision-recall curves is that they do not account for true negatives. In other words, a model is not rewarded visually by a precision-recall curve for correctly identifying negative cases. Generally a curve with higher precision (Y-axis) is preferred although lines can cross-over multiple times.

An example from my post on predicting criminal recidivism is shown below: 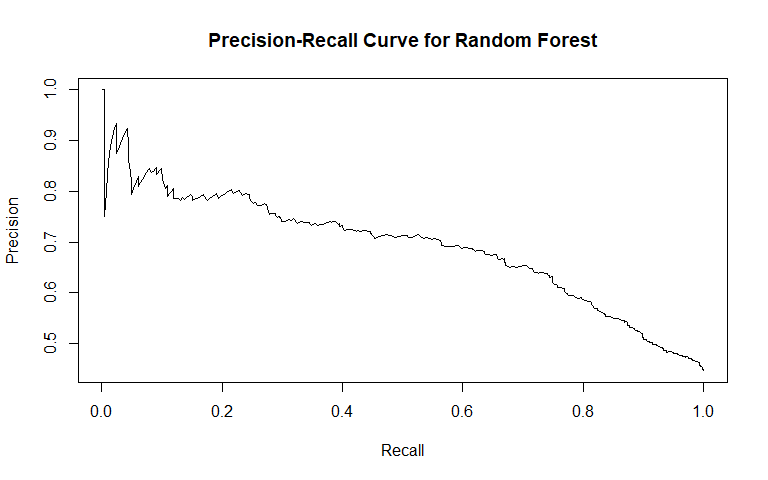 This simple 2x2 table can provide valuable insight into the performance of your predictive model.

The Wikipedia article on the Confusion Matrix concept contains the majority of information mentioned above and helped me grasp the subtle differences in the matrix’s metrics (say that 5 times fast).