We have all encountered random variables in our daily lives with the most notable example being the famous coin toss question - is the coin fair? What happens if the coin is unfair? This is an example of a discrete random variable which we discuss in more detail below. There also exist continuous random variables where examples may be someone’s height or weight - here the possible events exist in a continuous range.

In addition to exploring each distribution, we’ll look at where the distributions are related - here is a helpful map from Wikipedia of some relations between common probability distributions:

Let’s import the tools that we’ll need throughout this exploration: numpypandasscipy matplotlib and seaborn. 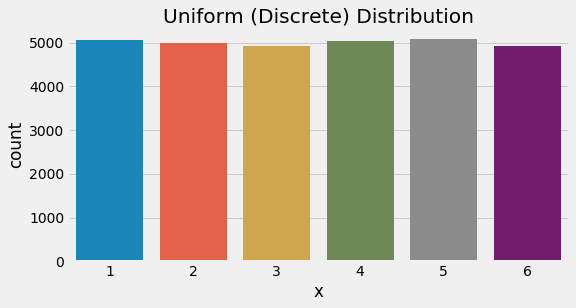 Above, we simulated the probability mass function by generating 30000 discrete random values - essentially a fair, 6-sided die. We would expect to see each of the 6 outcomes (1..6) result in 5000 occurrences each and we are pretty close. 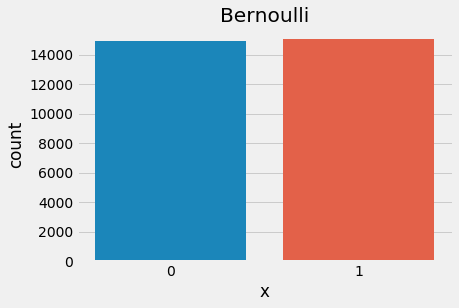 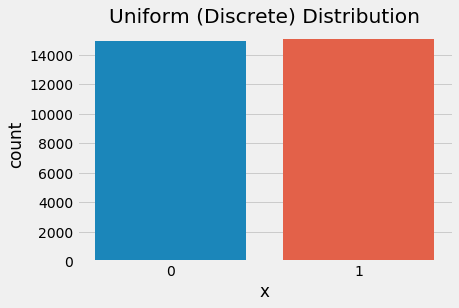 We can see that the distributions appear to produce similar probability mass functions. The Bernoulli distribution, however, allows us to shift the probability toward an “unfair coin” which creates an outcome imbalance. 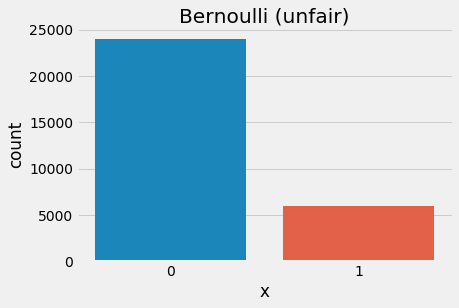 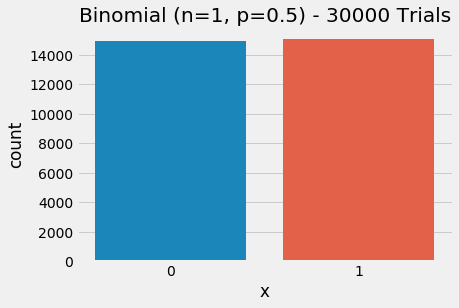 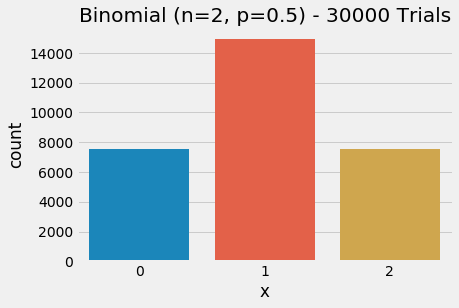 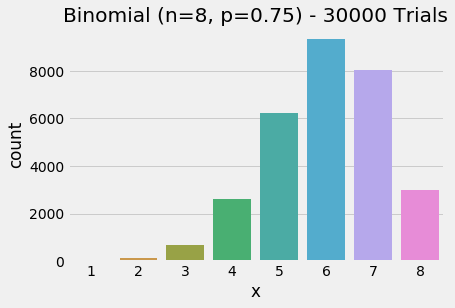 Let’s look at an example of a categorical distribution with 3 outcomes. 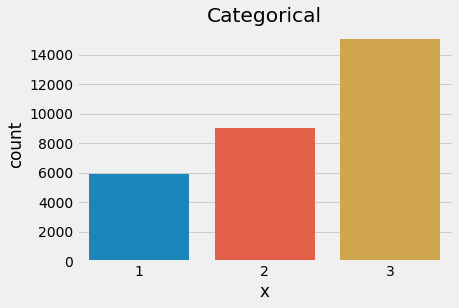 Here is a depiction of the relationships that we have been building to while reviewing these distributions. 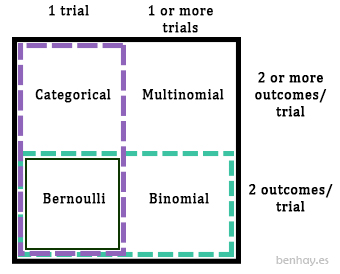 Note: A section of this code was repurposed from this StackOverflow post to solve a clipping issue in 3D plots. 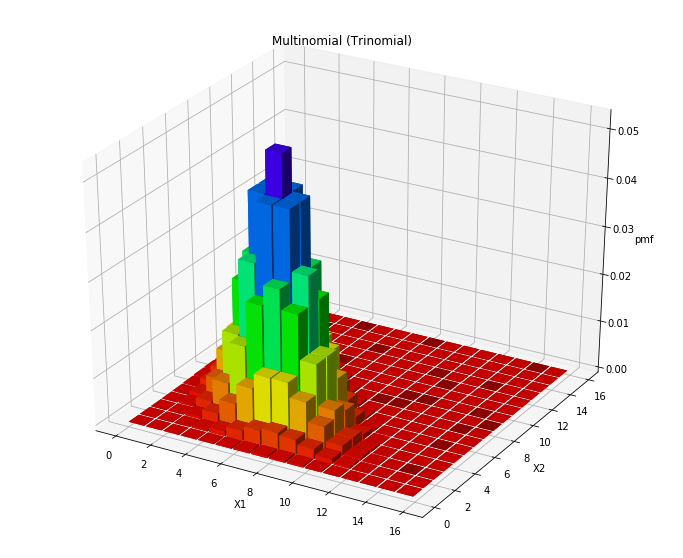 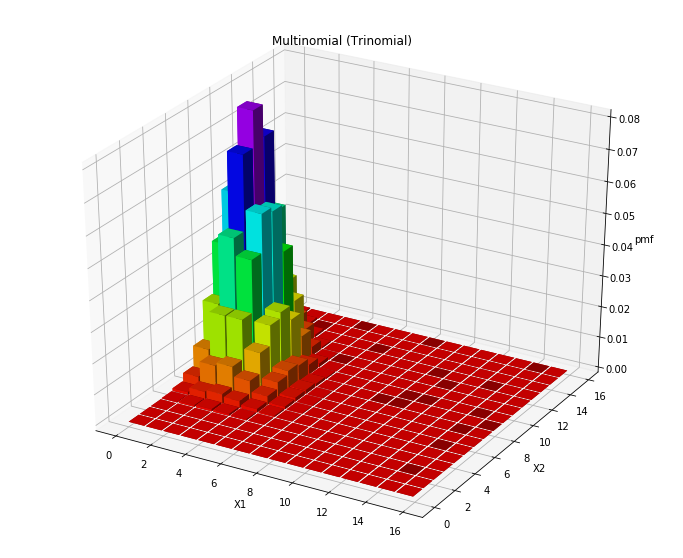 Let’s take a look at how the parameter affects the distribution behavior and shape. We have three examples below: 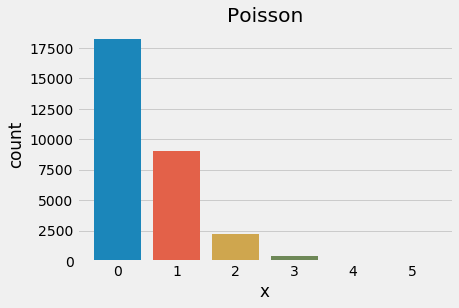 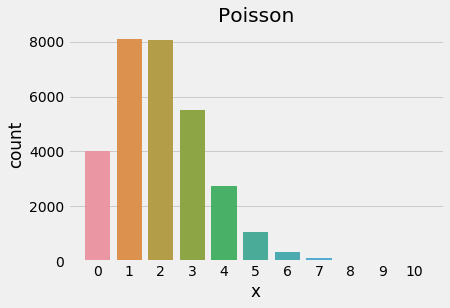 Above, we shift lambda, λ from 0.5 to 2 and notice that the distribution’s mode shifts away from 0. A good way to remember this is that lambda represents the mean rate of arrival and the pmf indicates the probability of that number of events occurring in the next time interval. If we use the classic example of the number of fish-shaped buses to arrive at the bus stop in the next minute and λ = 0.5, then the expected value is 0.5 (given by the mean) and the probability of 0 or 1 buses arriving is 0.6 and 0.3, respectively. If we expect 2 fish-shaped buses to arrive in the next minute, then λ = 2 and the probability of 0 or 1 buses arriving shifts to 0.135 and 0.27, respectively.

A natural question to follow would be, “what happens when λ ➜ infinity or becomes sufficiently large? We can reveal what happens by increasing lambda and plotting the results. 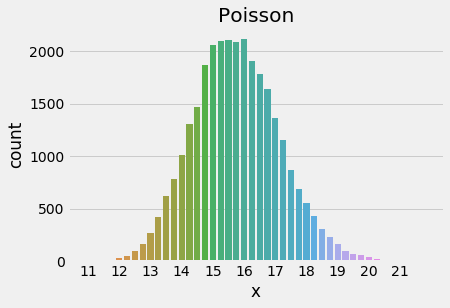 If it is not clear, the normal distribution (see below) can be used to approximate a poisson distribution when the parameter λ is sufficiently large. The distribution loses its asymmetry as lambda increases.

We evaluated the discrete uniform distribution and now we can evaluate the continuous extension of the probability distribution. We continue to rely on parameters a, b which define the range of values.

Notice how the mean and variance remain largely the same as the discrete form, but that the parameters can be expressed with respect to infinite bounds. The relationship between a and b still exists. 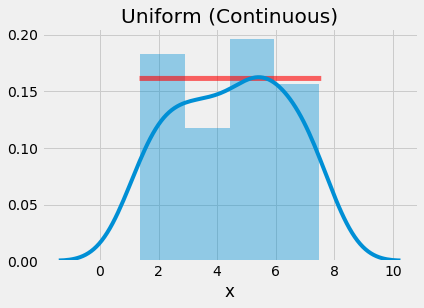 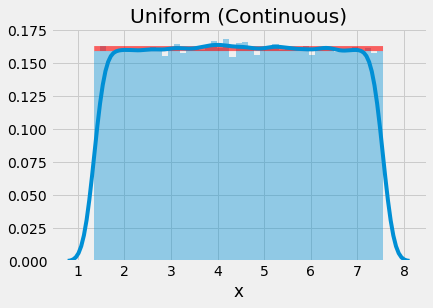 We can see that as we increase the number of samples, the sampled values more closely approximate the actual probability density function (pdf) shown by the red line. 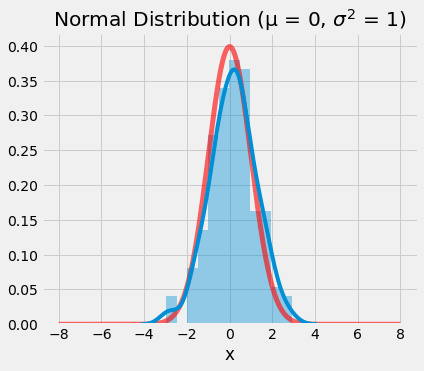 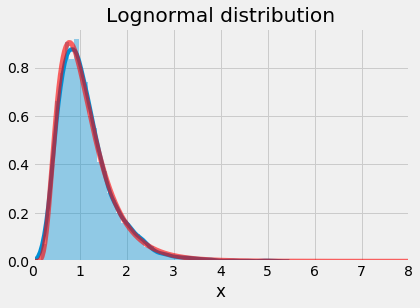 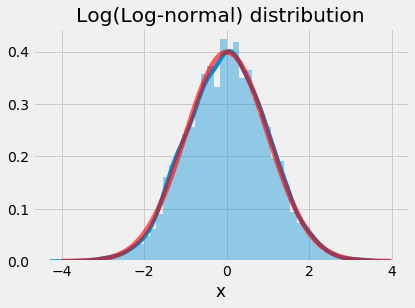 We can see that our code is working, we are not showing k=2 but we do have k=1,3 included. Let’s now compare our reconstructed chi-square distribution (using the sum of square normal distributions) to an image from Wikipedia. We can use our exclude_k argument to show only those we want to compare (exclude k=5,7,8). 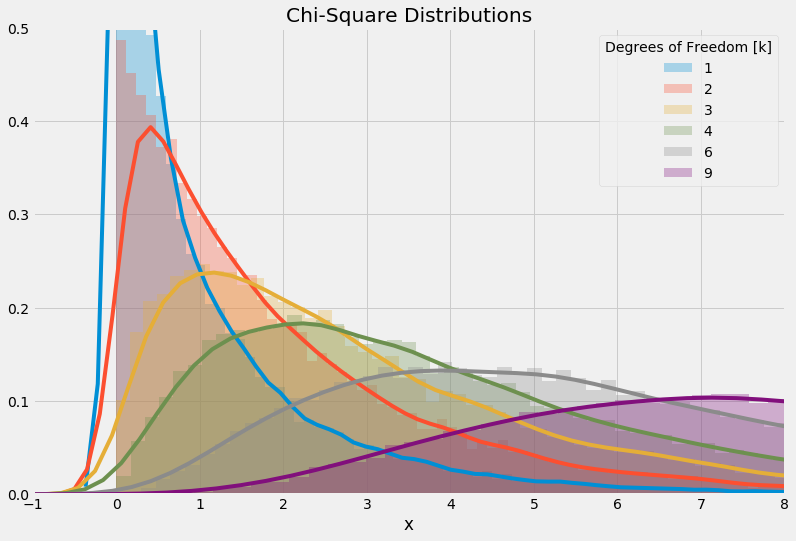 There is clearly a resemblance. Toward the edges of the chi-square distribution, such as near 0, our KDE smoothed line may not match exactly what is shown in Wikipedia, but the underlying histogram data does reflect the shape. 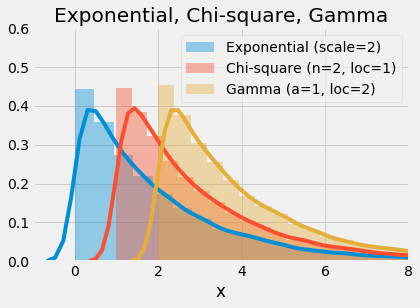 Let’s take at a few examples of gamma distributions with 8 pairs of parameters. Note here that we are passing in a value of θ as that is how the scipy functions are designed. 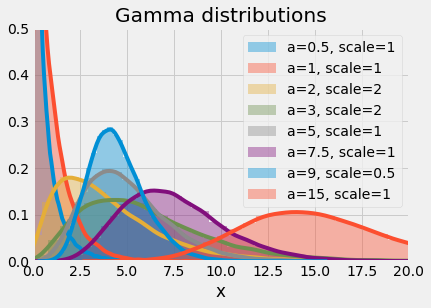 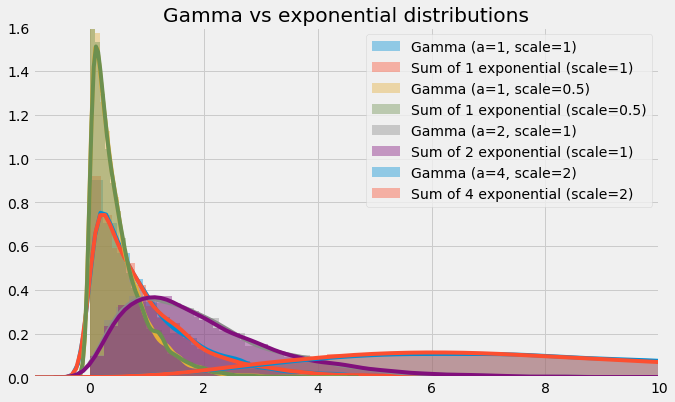 Using our function we can plot various beta distributions and see how they look in regards to shape, symmetry, and scale. 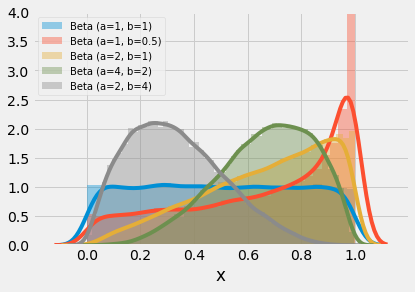 We’ve seen a distribution with a less than clearly defined mean (these are usually in the discrete branch of probability distributions). Now we can see a distribution with no clear mean in the continuous branch. The reasoning why this distribution does not have a mean is not visually intuitive but is made clearer through posts on CrossValidated like this. 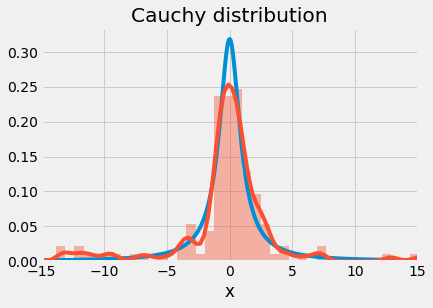 Notice that our random sample does not approximate the probability density function as well as other distributions have shown. Also, we can observe the trademark random ripples that appear in the tails of the distribution.

In this section, I am sharing a failed attempt to plot a distribution. The only example in this post is the multinomial distribution (which happens to be the most complicated to plot). 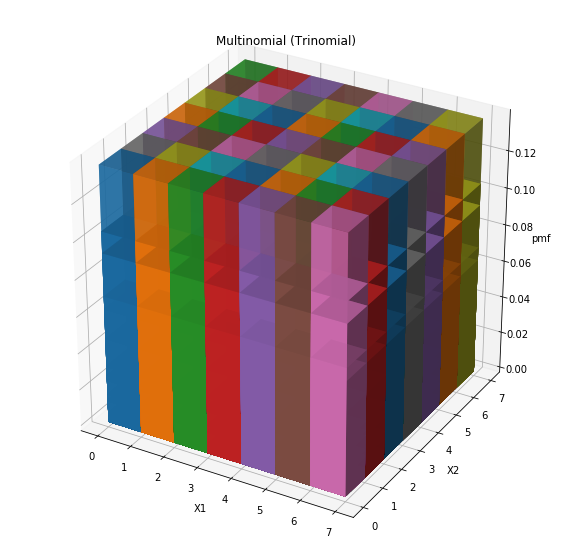